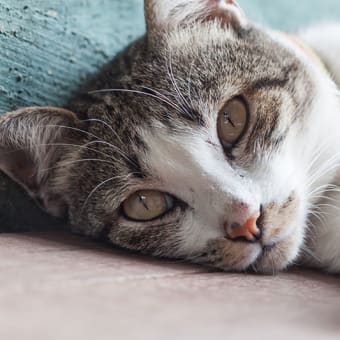 Hyperadrenocorticism, more commonly called Cushing's disease, is caused by the excessive and persistent production of cortisol from the adrenal glands. Excessive cortisol production can occur due to one of two underlying issues:

Symptoms of Cushing's Disease in Cats

Although Cushing's disease is quite rare in cats there are a number of symptoms that are characteristic of the condition. One of the most noticeable and troubling symptoms that can indicate your cat has Cushing's is extremely thin and fragile skin which breaks and bleeds with the slightest touch.

If your cat is showing any of the symptoms above contact your vet to book an examination for your cat.

Your cat's treatment of Cushing's disease largely depends upon the underlying cause of the condition:

If your cat is diagnosed with iatrogenic hyperadrenocorticism your vet will prescribe a controlled and gradual withdrawal of the medications that are causing the disease. Alternative medications will need to be prescribed to treat the underlying condition for which the problematic drug was originally prescribed.

Cats suffering from naturally occurring hyperadrenocorticism could be prescribed one or more of the following treatments:

Predicting the treatment outcomes for cats with Cushing's disease depends greatly upon the cause of the condition. Many cats suffering from iatrogenic hyperadrenocorticism respond well to treatment and go on to live comfortable lives for many months or years. Whereas, cats with Cushing's disease caused by a malignant tumor face a more guarded prognosis. Your vet will provide you with more details of your cat's specific condition and a prognosis based on your cat's illness.

At Carolina Veterinary Specialists in Charlotte our veterinary specialists offer advanced Internal Medicine care for cats diagnosed with Cushing's disease. Contact us to learn more about how your pet can be seen by our experienced vets.